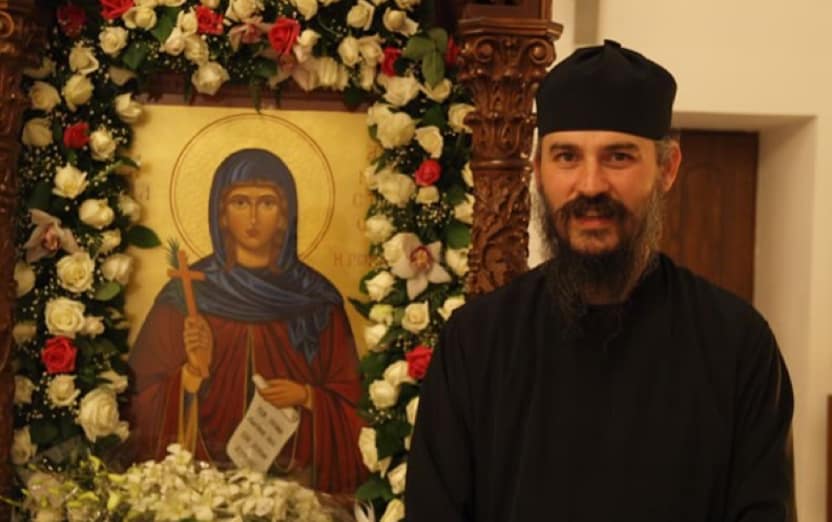 Archimandrite Vasileios Papadakis, who erected the Holy Monastery of St. Anastasia the Roman in Rethymnon, was born in 1968 in Rethymnon. In 1986 he achieved the highest score for the Panhellenic Examinations’ entrance exam to the University of Crete, Department of Primary Education, but he never attended the school, as at the age of 18 he joined the monks on Mt. Athos. In the orchard of the Virgin Mary he lived another 18 years, of which the last five years he spent in the Holy Monastery of Saint Gregory, where he was ordained deacon in 2001.

In 2004, at the invitation of the Metropolitan Rethymnis and Alopotamou, Anthimou and with the blessing of his elder, Father George of the Monastery of Saint Gregory, Mt. Athos, Father Vasileios was ordained Priest by Metro- politan Rethymnis and undertook the restoration of the ruined Monastery of St. Paul. Because attendance was large and the premises of the Monastery very small without it being possible for expansion, Father Vasileios, with the per- mission and blessing of the Church of Crete, the Ministry of Education, the Metropolitan Rethymnis and Alopotamou, Anthimou, and of course, of his elder, Father George, he decided to erect the Holy Monastery of St. Anastasia the Roman in Rethymnon.

Father Vasileios continues his spiritual work at the Monastery by celebrating the Divine Liturgy and by organizing spiritual talks for his congregation right after the liturgy. He often invites other speakers to these talks amongst them Fathers from Mount Athos and especially the Holy Monastery of Saint Gregory.

Father Vasileios also writes for local newspapers and magazines and has authored, edited and continues to publish several books, with many of them translated to Romanian and French and now in the process of translating them to English. These books are mainly theological and social in scope and are a complete exploration of the Theology of the Holy Fathers on contemporary theological and social issues.