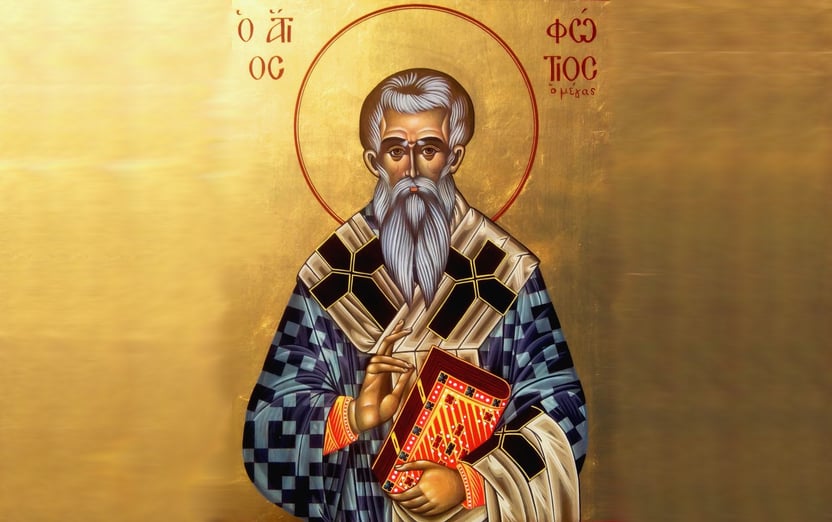 Saint Photios the Great, whose feast day is February 6, was the Ecumenical Patriarch of Constantinople during the middle of the ninth century. Together with other great Fathers of the Church, Saint Photios demonstrates through his writing and his teaching that scholarship can be a valuable instrument in proclaiming and expressing the Faith of the Church. The Orthodox Church honors Saint Photios as a theologian, a supporter of missionary activity, and a defender of the Faith. Photios was born around 820 AD to holy parents, who were confessors of the Faith.  His parents were persecuted for defending icons against the iconoclasts and were exiled from Constantinople.

His greatness was not only due to his defense of Orthodoxy against heretical papal practices, but also connected to his love and meekness. He vigorously opposed the addition of the filioque clause to the Nicene – Constantinopolitan Creed, and wrote On the Mystagogy of the Holy Spirit to preserve “the purity of our religion” and to hinder “those who chose to promote any other definition of dogma than the unanimous and common faith of the pious”.

St. Photios was forced to become Patriarch of Constantinople, however he took his calling seriously and at once set to work as a man of God..  One of his activities was to correct the error of Pope Nicholas of Rome. Holy Photios wrote to Nicholas, “Nothing is dearer than the Truth.”  In the same letter he noted, “It is truly necessary that we observe all things, but above all, that which pertains to matters of Faith, in which but a small deviation represents a deadly sin.”

St. Photios was also known for his brilliance and for his missionary zeal, and one of his greatest achievements was in the field of mission work.  In 863, St. Photios sent his two nephews from Thessaloniki, known to us today as Saints Cyril and Methodios, to preach the Gospel in Moravia.  He blessed St. Cyril in his work of developing an alphabet for the Slavonic people, and for the later work of St. Cyril and his brother St. Methodios as missionaries to the Slavs.  As a result of efforts they initiated, the Slavic peoples and nations embraced Orthodox Christianity.

As a Father of the Church, his achievements as Patriarch have earned him a reputation as the greatest of all Patriarchs.