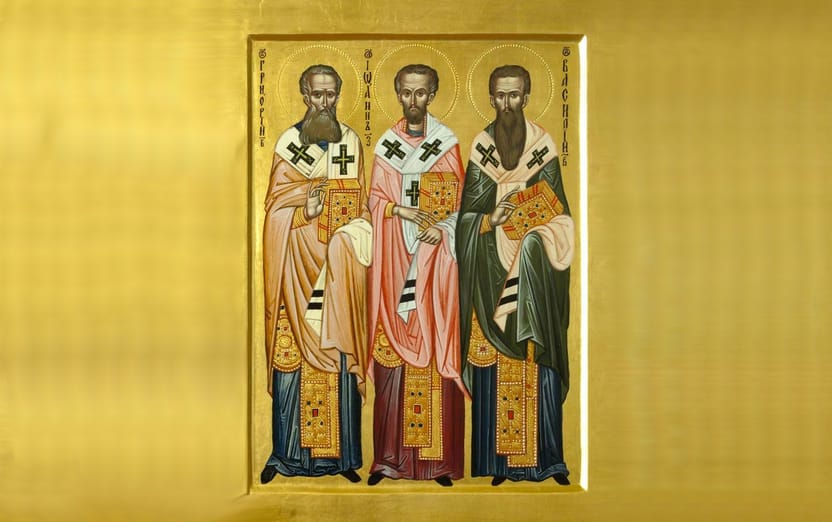 Basil the Great, Gregory the Theologian, and John Chrysostom

During the reign of the Emperor Alexios Komnenos (1081-1118), a controversy arose in Constantinople among men learned in the Faith and zealous for virtue about the three holy Hierarchs and Fathers of the Church, Basil the Great, Gregory the Theologian and John Chrysostom.

Some argued for Saint Basil [known as Basilians] above the other two because he was able, as none other, to explain the mysteries of the Faith, and rose to angelic rank by his virtues. Organizer of monastic life, leader of the entire Church in the struggle with heresy, austere and demanding shepherd as to Christian morals, in him there was nothing base or of the earth. Hence, said they, he was superior to Saint Chrysostom who was by nature more easily inclined to absolve sinners.

The partisans of Saint Chrysostom [known as Johnites] retorted that the illustrious Archbishop of Constantinople had been no less zealous than Saint Basil in combating vices, in bringing sinners to repentance and in raising up the whole people to the perfection of the Gospel. The golden-mouthed shepherd of matchless eloquence has watered the Church with a stream of homilies in which he interprets the divine word and shows its application in daily life with more accomplished mastery than the two other holy Doctors.

According to a third group [known as Gregorians], Saint Gregory the Theologian was to be preferred to the others by reason of the majesty, purity and profundity of his language. Possessing a sovereign mastery of all the wisdom and eloquence of ancient Greece, he had attained, they said, to such a pitch in the contemplation of God that no one had been able to express the dogma of the Holy Trinity as perfectly as he.

With each faction setting up one of the Fathers against the other two in this way, the whole Christian people were soon caught up in the dispute, which, far from promoting devotion to the Saints in the City, resulted in nothing but ill-feeling and endless arguments.

Then one night the three holy Hierarchs appeared in a dream to Saint John Mauropous, the Metropolitan of Euchaita (5 Oct.), separately at first, then together and, speaking with a single voice, they said: “As you see, the three of us are with God and no discord or rivalry divides us. Each of us, according to the circumstances and according to the inspiration that he received from the Holy Spirit, wrote and taught what befits the salvation of mankind. There is not among us a first, a second or a third, and if you invoke one of us the other two are immediately present with him. Therefore, tell those who are quarreling not to create divisions in the Church because of us, for when we were on earth we spared no effort to reestablish unity and concord in the world. You can conjoin our three commemorations in one feast and compose a service for it, inserting the hymns dedicated to each of us according to the skill and knowledge that God has given you. Then transmit it to the Christians with the command to celebrate it each year. If they honor us thus as being with and in God, we give them our word that we will intercede for their salvation in our common prayer.” At these words, the Saints were taken up into heaven in a boundless light while conversing with one another by name [PG 120].

Saint John immediately assembled the people and informed them of this revelation. As he was respected by all for his virtue and admired for his powerful eloquence, the three parties made peace and every one urged him to lose no time in composing the service of the joint feast. With fine discernment, he selected January 30 as appropriate to the celebration, for it would set the seal to the month in which each of the three Hierarchs already had a separate commemoration.

The three Hierarchs — an earthly trinity as they are called in some of the wonderful troparia of their service — have taught us, in their writings and equally by their lives, to worship and to glorify the Holy Trinity, the One God in three Persons. These three luminaries of the Church have shed the light of the true Faith all over the world, scorning dangers and persecutions, and they have left us, their descendants, this sacred inheritance by which we too can attain to utmost blessedness and everlasting life in the presence of God and of all the Saints.

With the Feast of the Three Hierarchs at the end of January — the month in which we keep the memory of so many glorious bishops, confessors and ascetics — the Church in a way recapitulates the memory of all the Saints who have witnessed to the Orthodox faith by their writings and by their lives. In this feast we honor the whole ministry of teaching of the holy Church, namely, the illumination of the hearts and minds of the faithful through the word of truth. So the feast of the Three Hierarchs is, in fact, the commemoration of all the Fathers of the Church, those models of evangelical perfection which the Holy Spirit has raised up from age to age and from place to place to be new Prophets and new Apostles, guides of souls heavenward, comforters of the people and fiery pillars of prayer, supporting the Church and confirming her in the truth.

Apolytikion in the First Tone

The three greatest beacons of the Three-sunned Godhead, who lighted the whole inhabited world with the beams of their divine doctrines, the rivers of wisdom flowing with honey, who watered all creation with streams of the knowledge of God, Basil the Great and Gregory the Theologian with famous John whose tongue spoke golden words, let all we lovers of their words now assembled honour them in hymns. For they ever intercede with the Trinity on our behalf.

Kontakion in the Second Tone

You have taken, Lord, the sacred, the God-inspired heralds, the high peak of your Teachers, for the enjoyment of your good things and for repose; for you accepted above every offering their toils and their death, you who alone glorify your Saints.

Source: The Synaxarion, The Lives of the Saints of the Orthodox Church, Volume 3, Holy Convent of the Annunciation of Our Lady, Ormylia, 2001.