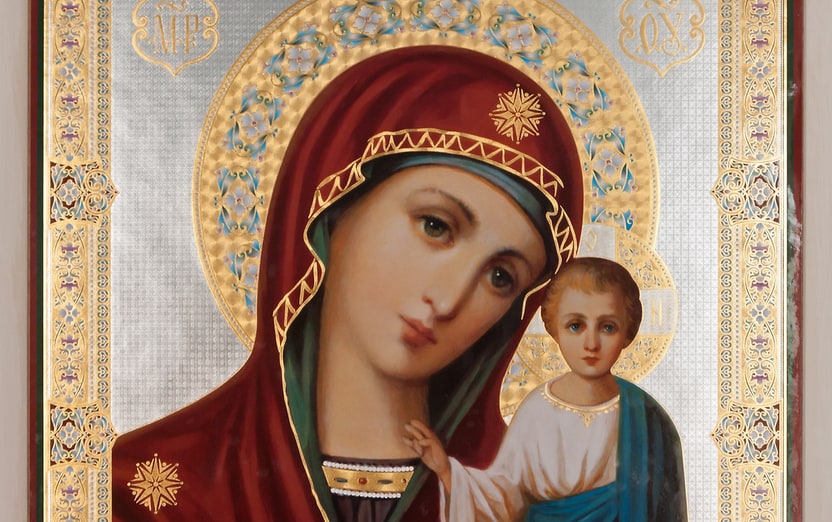 It must be stated at the beginning that the only true “saint” or holy one (Hagios) is God Himself. The Bible states “For I am the Lord your God; you shall name yourselves holy and keep yourselves holy, because I am holy … ” (Levit. 11:44; 19:2 and 20:7). Man becomes holy and “sainted” by participation in the holiness of God.

Holiness or sainthood is a gift (charisma) given by God to man, through the Holy Spirit. Man’s effort to become a participant in the life of divine holiness is indispensable, but sanctification itself is the work of the Holy Trinity, especially through the sanctifying power of Jesus Christ, who was incarnate, suffered crucifixion, and rose from the dead, in order to lead us to the life of holiness, through the communion with the Holy Spirit. In the Second Letter to the Thessalonians St. Paul suggests: “But we are bound to thank God always for you, brothers beloved by the Lord, because from the beginning of time God chose you to find salvation in the Spirit that consecrates you, (en agiasmo Pneumatos) and in the truth that you believe. It was for this that He called you through the Gospel we brought, so that you might possess for your own the splendor of our Lord Jesus Christ” (2: 13–14).

Through the work of the Holy Trinity all Christians could be called saints; especially in the early Church as long as they were baptized in the name of the Holy Trinity, they received the Seal of the Spirit in chrismation and frequently participated in the Eucharist. In the same spirit St. Paul, when writing to the Churches he had visited, calls all the faithful “saints.” Writing to the Ephesians, he addresses “the saints who live in Ephesus” (1:1); writing to the Corinthians he uses the same expressions (2 Cor. 1:11). St. Basil, commenting on this point, writes that Paul refers to all those who are united with God, who is the Being, the Life and the Truth (Against Eunomius, II, 19). Furthermore, St. Paul writes to the Colossians that God has reconciled men by Christ’s death, “so that He may present you before Himself holy, without blemish and innocent in His sight” (1:22).

In our society, however, who can be addressed as a saint? Who are those men and women and children who may be called saints by the Church today? Many Orthodox theologians classify the saints in six categories:

Each and every one among all these saints has his or her own calling and characteristics: they all fought the “good fight for the faith” (1 Tim. 6:12 and 2 Tim. 4:7). All of them applied in their lives the scriptural virtues of “justice, piety, fidelity, love, fortitude, and gentleness” (1 Tim. 6:11).

The Concept of Theosis

The ultimate goal of the saint is to imitate God and live the life of deification (theosis). St. Maximos the Confessor (seventh century) writes that the saints are men who have reached theosis; they have avoided unnatural development of the soul, that is, sin, and tried to live the natural way of life (i.e., living according to created nature), turning and looking always towards God, thus achieving total unity with God through the Holy Spirit (On Theology, 7.73).

It may be stated here that the Saints are first of all “friends” of God. Secondly, through their genuine piety and absolute obedience to God, they pleased Him and have therefore been “sanctified” both in soul and body, and subsequently glorified in this world. Third, they have been accepted in God’s bosom after their passing from the world into eternal life. Fourth, many of them have been given special “grace” or “favor” to perform miracles either before their departure from this world or after. Fifth, they have been granted the special gift to pray and intercede for those still living in this world and fighting the “good fight” for the glory of God and their own perfection in Christ. This intercession springs from the fact that they also are part of the “Communion of Saints”. They share prayers and good works with Christians on earth and there is a constant interaction and unity between the glorified saints in Heaven and Christians who still live in the world.

The Veneration of the Saints

In the Orthodox Church the worship (latreia) given to God is completely different from the honor (tim) of love (agape) and respect, or even veneration (proskynesis), “paid to all those endowed with some dignity” (St. John Chrysostom, Hom. III, 40). The Orthodox honor the saints to express their love and gratitude to God, who has “perfected” the saints. As St. Symeon the New Theologian writes, “God is the teacher of the Prophets, the co-traveller with the Apostles, the power of the Martyrs, the inspiration of the Fathers and Teachers, the perfection of all Saints … ” (Catechesis, I).

The feast days and the celebrations honoring the saints had become a common practice by the fourth century. The twentieth canon of the Council of Gangra in Asia Minor (between the years 325 and 381) anathematizes those who reject the feast days of the saints. So great was the esteem in which the Apostles, prophets, and martyrs were held in the Church, that many writings appeared describing their spiritual achievements, love and devotion to God.Throughout early Christianity, Christians customarily met in the places where the martyrs had died, to build churches in their honor, venerate their relics and memory, and present their example for imitation by others. Interesting information on this subject derives from the Martyrdom of St. Polycarp (ch. 17-18), according to which the early Christians reverently collected the remains of the saints and honored them “more than precious stones.” They also met on the day of their death to commemorate “their new birthday, the day they entered into their new life, in Heaven.” To this day the Orthodox have maintained the liturgical custom of meeting on the day of the saint’s death, of building churches honoring their names, and of paying special respect to their relics and icons. The Seventh Ecumenical Council (787 A.D.), in summarizing this practice of the Church, declares that “we adore and respect God our Lord; and those who have been genuine servants of our common Lord we honor and venerate because they have the power to make us friends with God the King of all.”

The Orthodox Church does not follow any official procedure for the “recognition” of saints. Initially the Church accepted as saints those who had suffered martyrdom for Christ. The saints are saints thanks to the grace of God, and they do not need official ecclesiastical recognition. The Christian people, reading their lives and witnessing their performance of miracles, accept and honor them as saints. St. John Chrysostom, persecuted and exiled by the civil and ecclesiastical authorities, was accepted as a saint of the Church by popular acclaim. St. Basil the Great was accepted immediately after his death as a saint of the Church by the people. Recently, in order to avoid abuses, the Ecumenical Patriarchate has issued special encyclical letters (tomoi) in which the Holy Synod “recognizes” or accepts the popular feelings about a saint. Such an example in our days is St. Nicodemos of the Holy Mountain (1955).

Since the early Christian period there have been preserved many moving descriptions of the lives and martyrdoms and the miracles of the saints. They were (and still are) called synaxaria (from the Greek word Synaxis, meaning a meeting in the church for liturgical purposes, where the lives of the Saints were read). St. Nicodemos of the Holy Mountain composed synaxaria of the saints during the eighteenth century; and, most recently, Fr. George Poulos and Dr. Constantine Cavarnos have written lives of the saints in English.